Featured Recipe: Guinataang puso ng saging, baboy at hipon
(Banana Bud/ heart, pork and shrimp in coconut milk)
by Chef Socrates Z. Inonog, ACF, CCE
This week, we feature Isabela, the second largest province of the Philippines located in the Cagayan Valley Region or Region II. It is also reputed to be the rice and corn granary of Luzon.

Isabela's industry thrives on agriculture. With an aggregate land area of 10, 665 square kilometers that represents almost 40 percent of the regional territory, its natives typically harvest rice or corn from its wide arable fields; or catch fish in its bountiful river and ocean waters. Aside from agriculture, some potential investments opportunities are found in fisheries and tourism.

Isabela is the most populated province in Region II, with a total of 68.71 percent of its total household identifying themselves as Ilocanos. The rest of the population are comprised of the Ibanag and the Tagalog ethnic groups, among others.

Ilocanos are known for being spendthrift or frugal, preferring the practical over leisure. Ilocanos exemplify individuals who apply respect and modesty in their everyday lives.

Aside from their outstanding traits, Ilocanos are also known for their love of food. People even say that you can identify an Ilocano if his or her favorite expression is mangan tayon (let's eat)! Ilocanos diet boast of a healthy diet comprising mostly of boiled or steamed vegetable and freshwater fish. Among the Ilocano favorites are the pinakbet, a dish that include vegetables as ingredients partnered with shrimp paste or the bagoong.

Ginataang puso ng saging is as easy as its name suggests: with the blossom cooked in coconut milk with shrimps or dried fish flakes as optional ingredients. It is also rich in iodine, fiber, and other minerals that makes it a healthy dish. 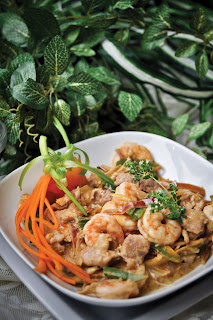 1) in a bowl,combine banana bud and salt. Let sit for 15 minutes,then squeeze moisture out of banana bud to remove the puckery taste. Wash well and drain as you squeeze and liquid out
2) in a wok or a deep braising pan, pour oil. Brown pork that has been dusted in flour sessoned with salt and pepper. Remove from the fire and set aside.
3) in the same vessel,sauté garlic, Ginger and onion. Cook until the garlic is lightly browned. Add onion and sauté until translucent. Add tomatoes and continue cooking for another 5 minutes.
4) add browned pork and water. Bring to boil and simmer for 15 minutes until tender
5)add coconut milk and banana bud. Return to a boil and simmer for another 15 minutes. Stir gently while simmering.
6) add shrimp and jalapeño peppers. Simmer and cook for 10 minutes. Stir.
Catch us again next week for another Pinoy recipe that you'll surely love. Don't miss it!


Isla Kulinarya lets you explore the islands, taste the food, relive the memories--- all made possible by Island Pacific Supermarket. Go and visit an Island Pacific near you with branches in Southern California located at Cerritos, Canoga Park, North and South Vernon in Los Angeles, Panorama City and West Covina; Union City and Vallejo in Northern California. Check out our website at www.islandpacificmarket.com. Stay connected with us--like us on Facebook (island pacific market), follow us on Twitter (islandpacificUS) and Blogger (island pacific market). Fro your comments, suggestions, and request for recipes that you want us to feature, please email info@islandpacificmarket.com. "Presyong Sulit...sa Isalnd Pacific."
No comments:

Island Pacific Supermarket
While we are known to be a Filipino Supermarket, Island Pacific aspires not only to promote Filipino cuisine to Filipino communities across United States but also to place it in the world culinary map. We accomplish this by offering the finest and top of the line products in our stores because that’s what Filipino cooking is all about – you just never compromise with ingredients. We believe a country’s food is a fair reflection of its culture and we at Island Pacific continuously showcase the colorful and rich Filipino tradition to the world through native foods culled from the different regions of the Philippines. We are very proud of our roots, our steadfast efforts to make it known, and we will continue to strive to be the best at what we do.